New way to mark the quilt 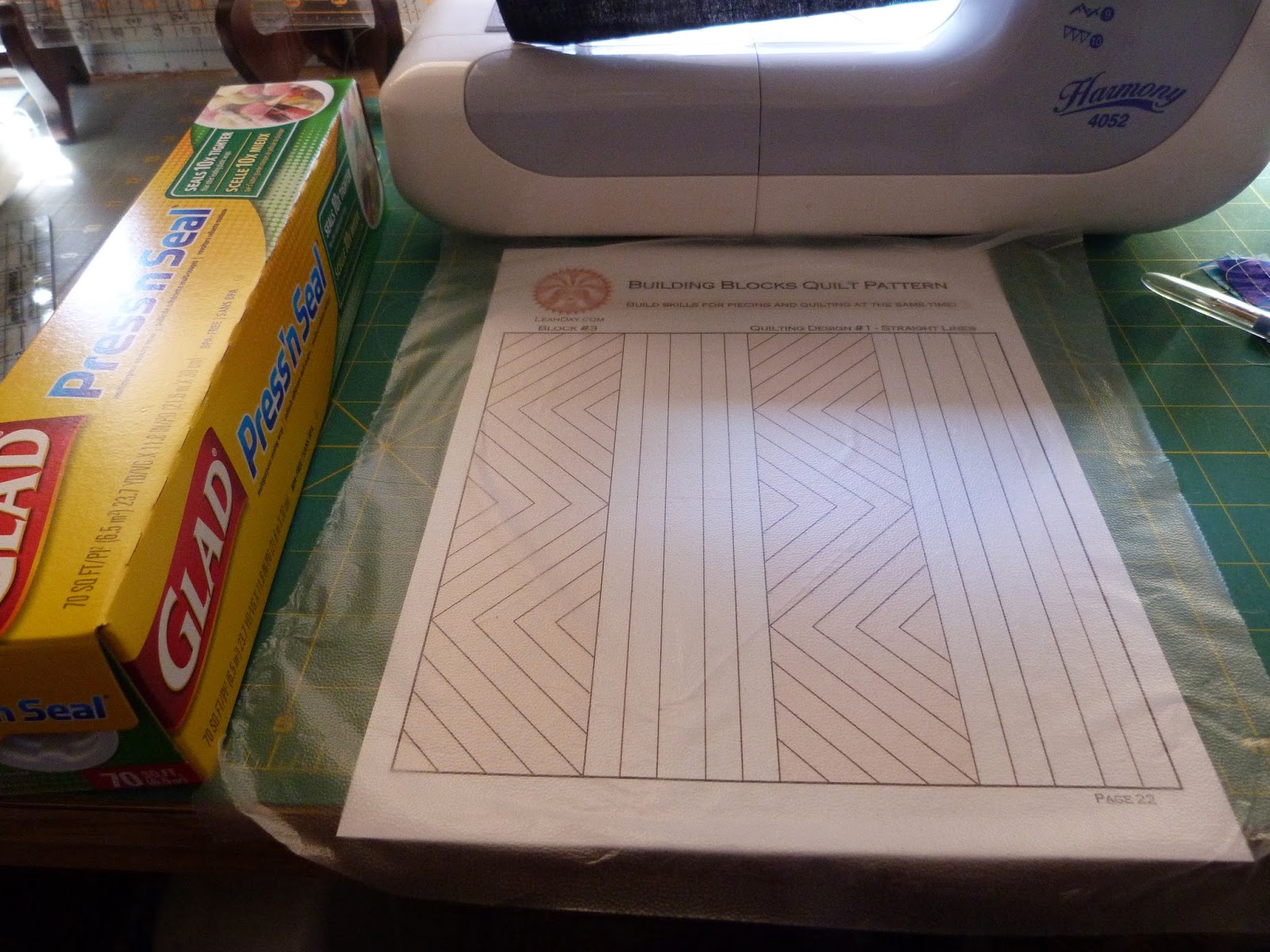 I have never been a fan of marking the quilt. It is the one aspect of quiltmaking that I find often tedious and sometimes frustrating.

I've tried different marking pens, pencils, pounces, chalks, and everything else I can think of.

I'm always looking for new ways to do this task. So, when I learned of this new technique, marking with Glad Press 'n Seal, I thought I would give it a try. 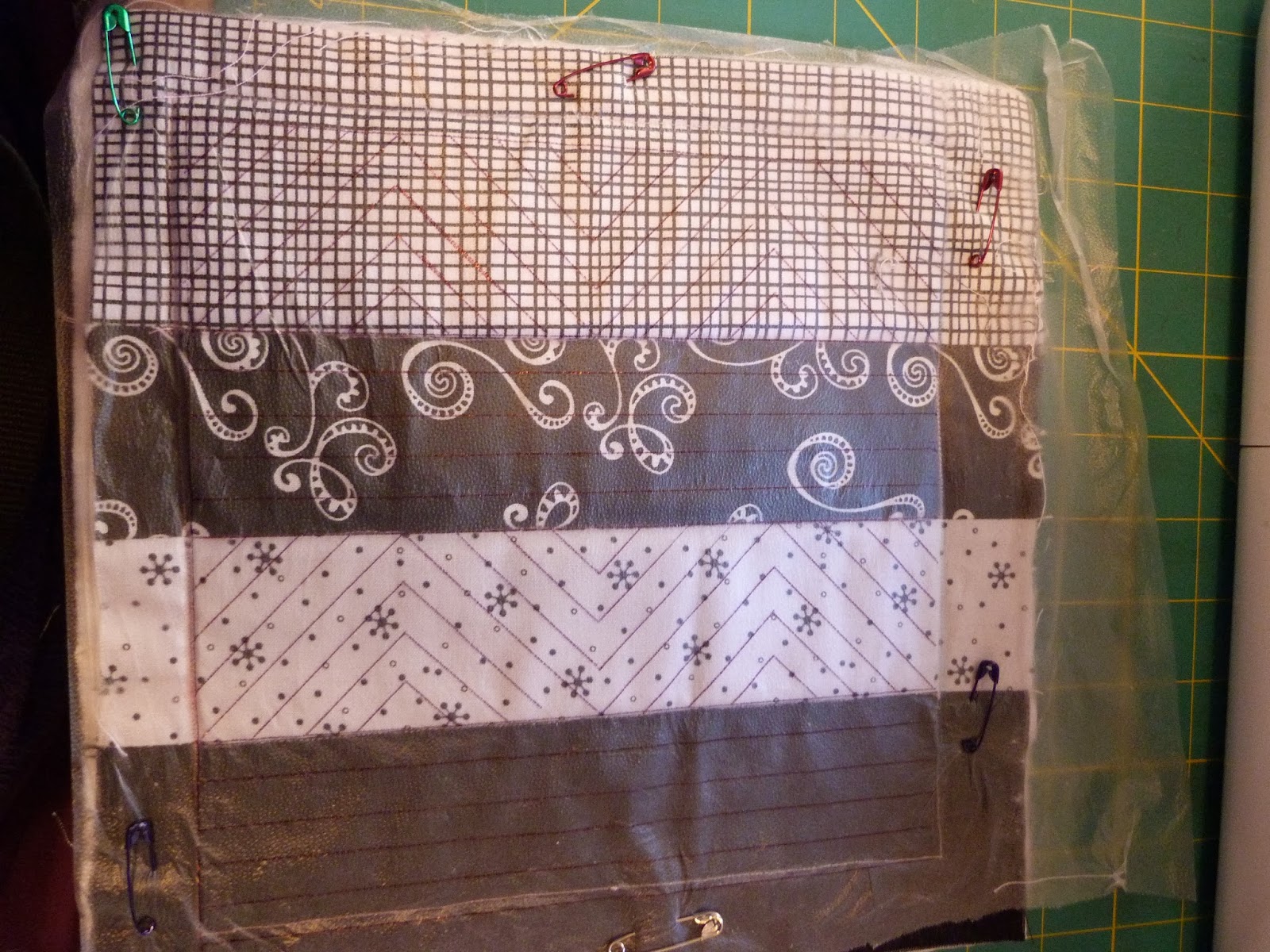 I apologize for not being able to give credit to whoever came up with this rather ingenious idea. Truth is though, I can't remember where I heard about it. I have been doing a great deal of reading on the Internet about marking a quilt. 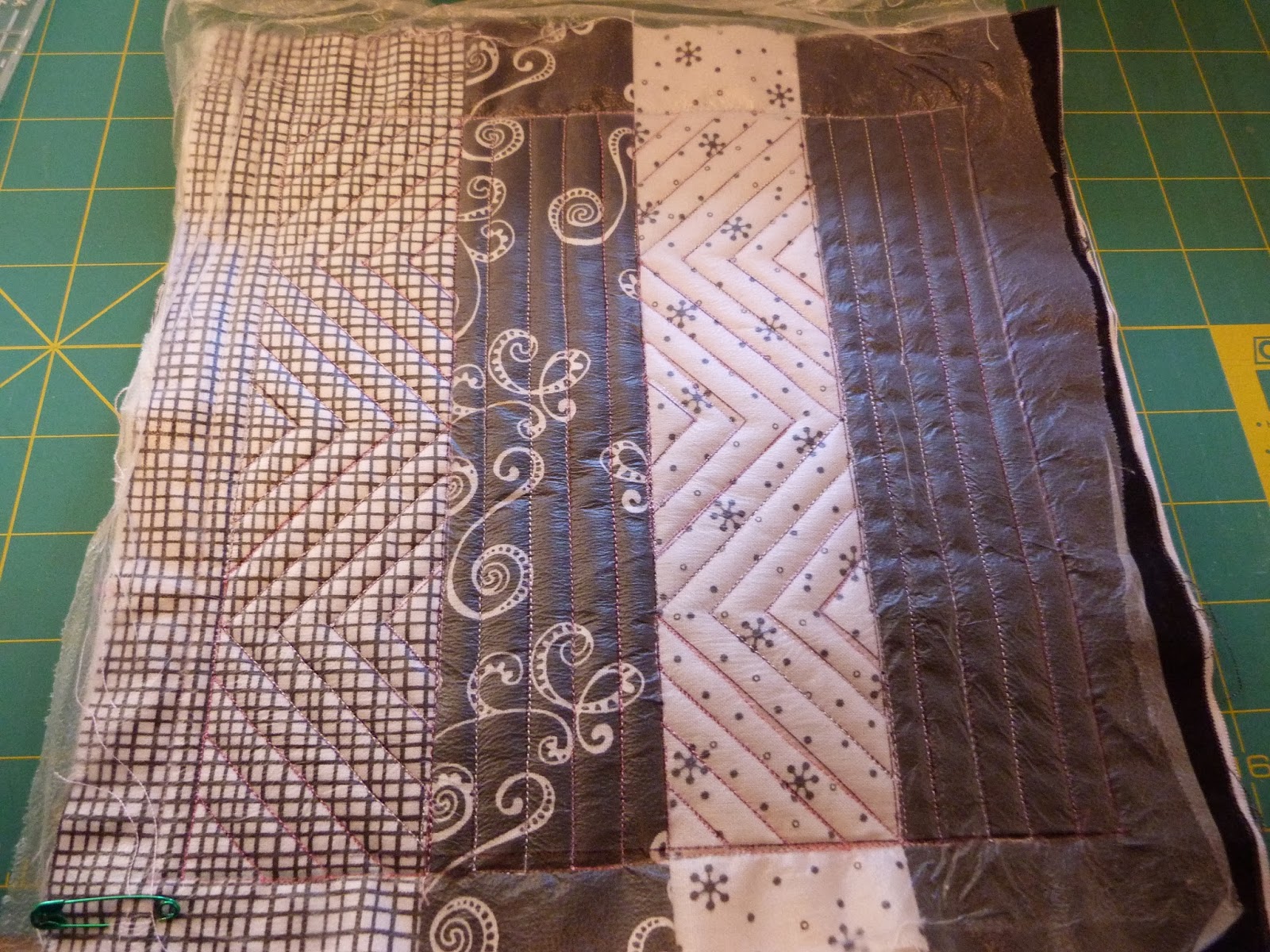 In doing Leah Day's Building Blocks Quilt Along, one that combines piecing and free-motion quilting techniques, block by block, I decided this was a perfect time to try marking the quilting pattern using Glad Press'n Seal.

In the first photo, at left, I placed a piece of the Glad Press'n Seal onto a pre-printed pattern provided in Leah Day's Building Blocks Quilting Project. The paper has a sticky side that adheres perfectly to the pattern. Once smoothed out across the paper, it was easy to trace the lines of the quilting design onto the Glad wrap with a ball point pen. 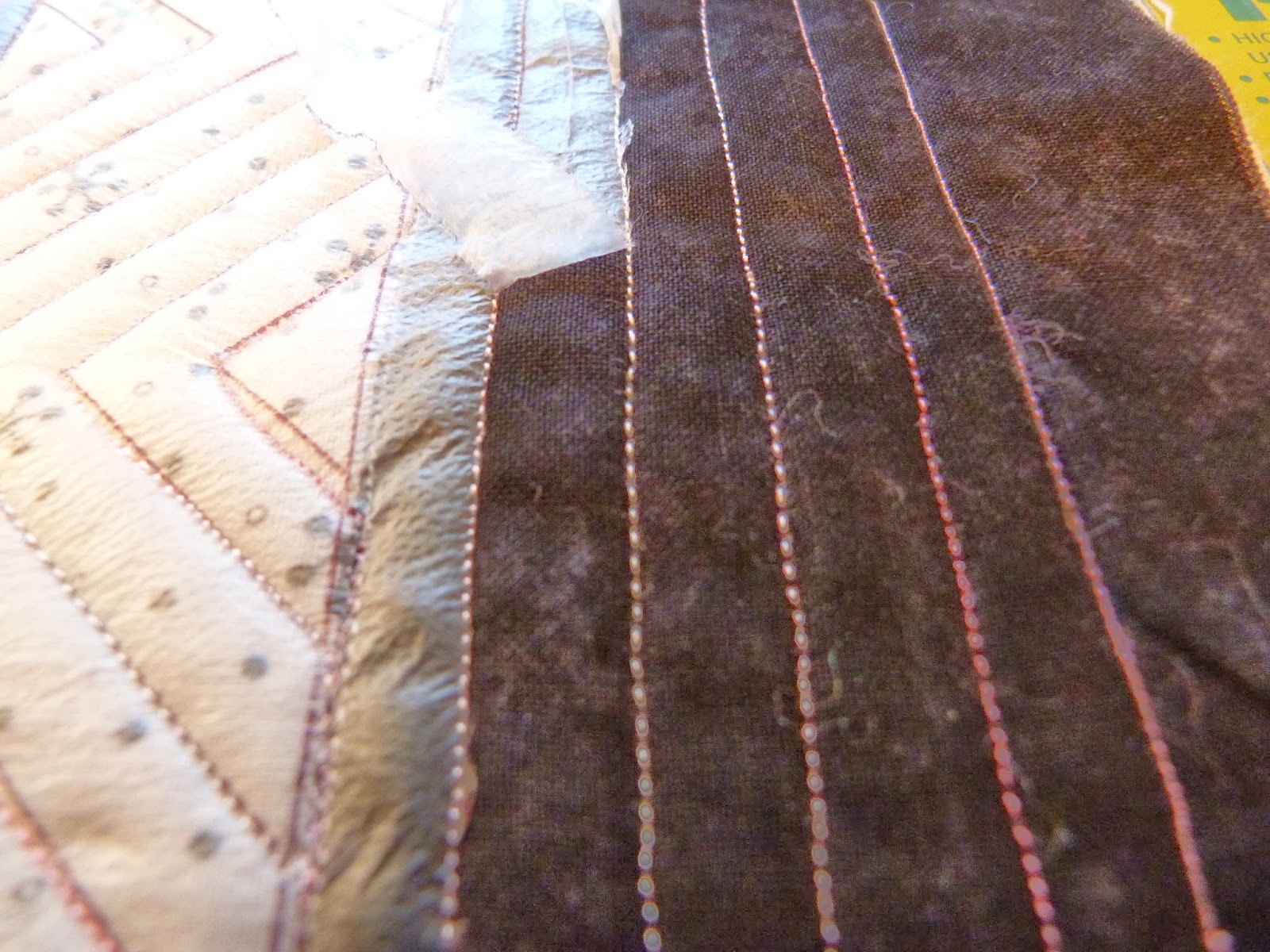 The pattern requires stitching in the ditch and around the block. I decided to do that first, since although the Glad paper is transparent, stitching in the ditch is hard enough without any obscurity. Besides, I tried it and the lines were awful so I picked out the stitches, ripped off the paper and started again. I put pins into the paper, which probably wasn't necessary, but after lining it up perfectly with the seams, I didn't want it to shift at all.

It was pretty easy to sew through the paper, although I admit it did feel like I was sewing a disposable baby diaper. 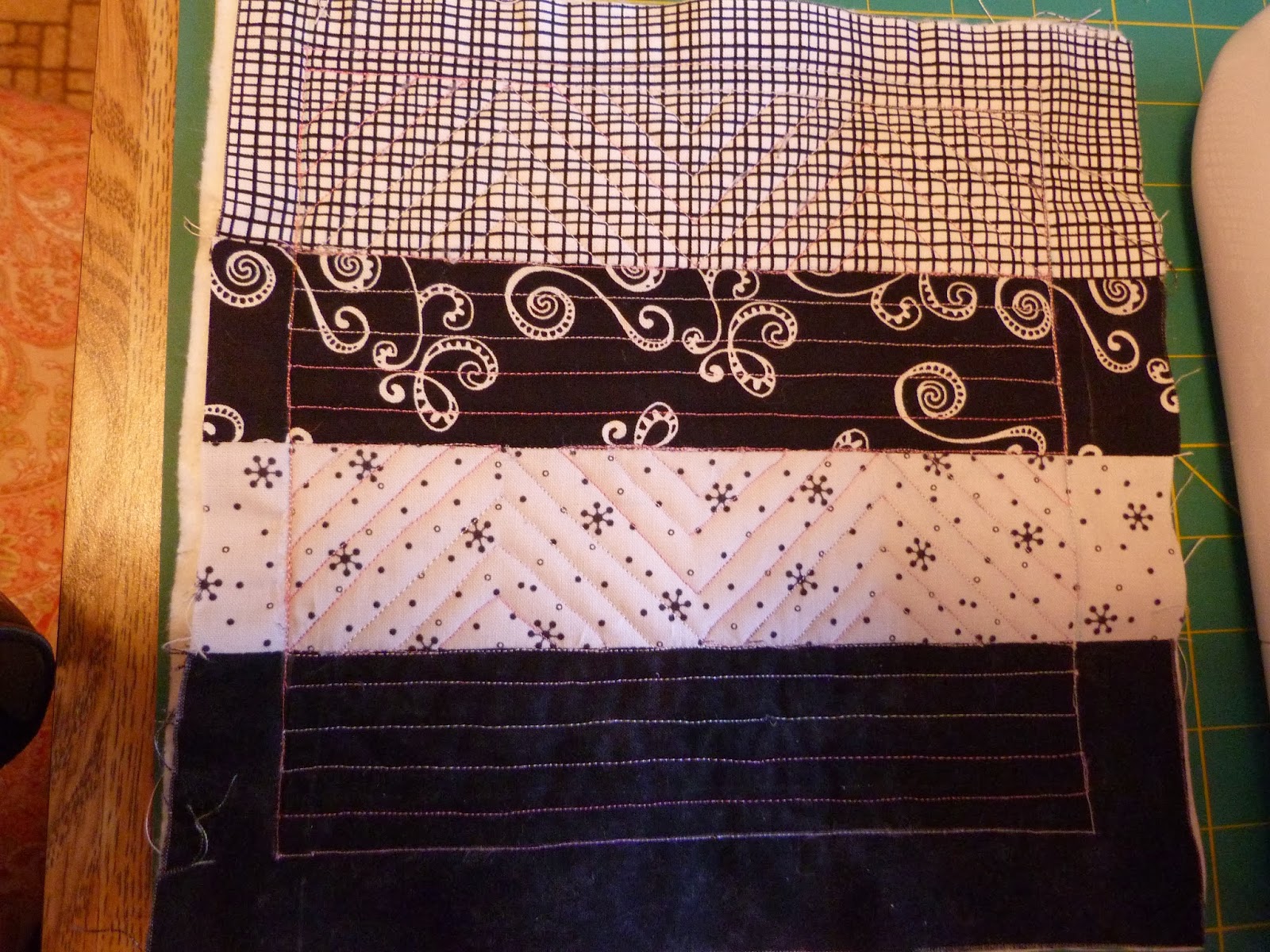 The third picture shows the entire block completely quilted. It was easy to follow the lines, or at least as easy as following the lines without the paper would be. That is never an easy task. Truthfully, I much prefer free-motion quilting freehand. I need practice at this however, because I know that isn't always possible.

Removal of the paper was fairly easy, as shown in the fourth photo. It was just a matter of scratching the paper with a sturdy fingernail or the trusty seam ripper, and then ripping it off.

The only problem here was that with this pattern, there are lots of tiny quilted areas, so it was a little more tedious than it otherwise might be. Also, the paper remained sticky. It was easily tearable though and it appears that every bit of it was removed.

The fifth and final picture shows the completed block. There appears to be no remnants of paper left, and the stitches were not harmed in any way by pulling on the paper.

Even though I can't see any remnants of the paper, I will not press this block on its right side. I will press it from the back just to be sure. I've seen what plastic products do to an iron. It isn't pretty; doesn't smell very well either.

I just might use this technique again, although I am not sure it will be my only marking technique. It is nice to have options. Certain things will work better than others depending on the circumstances.

I am just glad I found a way to try something new.