A few months ago, I set out to learn free motion quilting. I am making some headway, thanks to the excellent advice and technique taught by Leah Day, who is probably the best machine quilter I've ever seen.

Her work looks like something done on a long arm quilting machine, but it isn't; it is done on her domestic sewing machine. She really puts her machine through its paces. She claims anyone else can do it too. 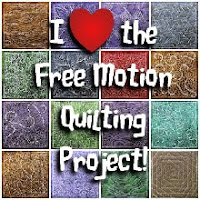 I started reading Leah's blog the Free Motion Quilting Project. What Leah has done is truly amazing. Not only is she an accomplished artist, but she is young, pretty, sweet, patient, and a natural teacher who is willing to share her expertise with anyone who is interested. Above all, she is an inspiration.

I took her up on one of her quilt along projects, just to see if it was possible for me to even learn FMQing. The project was a small, whole cloth quilt. She provided the design.

I had only dabbled in FMQing a tiny bit, as seen in a previous blog post Trying new quilting challenges. I was intrigued enough that my insatiable appetite for learning kicked in. I knew I wanted to know more and practice more of the skills that until recently I didn't even know existed. Here is the result: 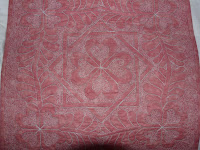 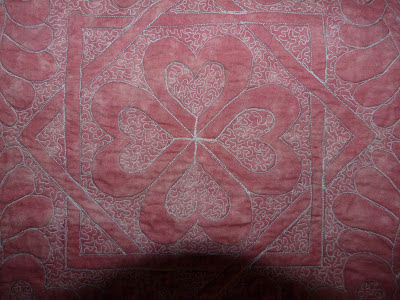 While there are tons of mistakes and a few total screw-ups, the overall result wasn't half-bad. In fact, I rather like how this piece turned out. It was certainly good enough to make me want to get better. I could see how practice would improve the look and feel of my work.

When I saw that Leah was teaching a class at Craftsy, I was interested. As much as I wanted to take this class, I couldn't afford it. Times are tough and I have been cutting back even on my beloved quilting magazine subscriptions. But when the class went on sale, I signed up.

The class, called Free Motion Quilting a Sampler, is to quilt the Craftsy Block of the Month, which was taught by another of my favorite quilters--Amy Gibson. Amy's class was free. It offered some new piecing techniques that provided a new modern take on traditional blocks. Some of the techniques were not yet in my limited quilting repertoire. I really enjoyed the BOM, looking forward to the first of the month every month for a year.

I finished watching the last lesson yesterday. I didn't quilt along, at least not yet. I will watch the lessons again when I'm ready to dive in. I wanted to take the entire class before making any decisions on how to quilt these blocks. After all, the 20 blocks that will make up this quilt span an entire year of work. I had already decided to FMQ this quilt rather than to hand quilt it. I love hand-quilting, but I already know how to do that. I need to know how to quilt on my machine, so that decision was an easy one. Besides, I have other projects that can accompany my mindless television watching at night.

The biggest decision was whether to quilt the entire quilt or to use the quilt-as-you-go technique. I chose the latter, simply because I really am limited by space, as described in a previous post, Happy New Year Happy Quilting. Besides, I had no idea how to quilt the blocks and then put them together to make a finished quilt. I have wanted to learn that technique for some time. Now is as good a time as any. I was initially concerned that this would require wasting fabric, but I now know there is no such thing. Even the tiniest pieces can be reused in another way. For one thing applique projects are great for this.

Leah taught many different designs in her class. Some are easier than others. I won't be happy until I can make pretty free-hand feathers. While I'm still in the process of making the decision about which fabrics to use for sashing and backing, since the quilt will be reversible, I know it won't be long now. I have already purchased the batting, which simply needs to be cut into squares. I'm pretty anxious to get started, and will post my progress.