Peace be with you Timi 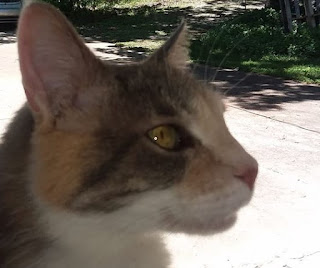 This is a sad day, in that we had to say goodbye to Timi, who in many ways was the matriarch of our family. As with many families who have multiple feline members, it is clear that they often times rule the roost. That was Timi.
Timi was the Mother of our five kittens, born fifteen years ago. She outlived three of them. Most recently, her first born was my Ryan, the best cat that ever lived in my view. I just lost Ryan last March and still miss her more than I can say.

Timi gave us the greatest gifts in those little bundles of fluff she birthed in a box on the front porch on a hot July day in 2007. Timi was a special cat who used to take walks with us. She was a stray initially, but kept looking in the windows until we gave in and let her inside. Once we did, she broke out of an ill-fitting screen and came back pregnant. 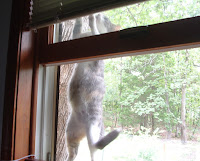 I’ll never forget when she climbed the window next to my computer desk, her little belly bulging, to alert me that ‘it was time.’

I met her on the front porch where I had already prepared with a birthing box for her and a baby box for the little ones.

I had read up on what to do in case our young Mother-to-be was unsure of how to proceed with the birthing process. I was fully prepared to help her any way I could. 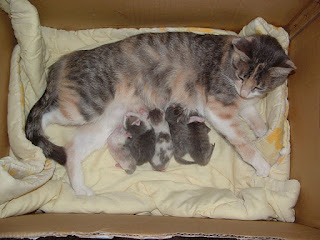 Timi did great. She was such a trouper. And she raised her girls well. I have been so happy with this little feline family we melded into our own. As empty-nesters, whose kids live far away, John and I considered the girls our second family.

Now, with the loss of Timi, we now have only two of her kittens. Rusty, the runt of the litter lived only 11 days. Boo died two years ago with a respiratory ailment. She was a special needs kitten, in that her entire right side was not fully developed. She basically was a three-legged cat, but she never let that stop her. Kenni and Kasey are doing great. And, we have taken in a new little girl, Sally. But this mom and her five babies can never be replaced.

Timi may have been somewhat demanding, but she gave so much more than she took. When we went for walks, Timi would always walk with us, her tail high in the air. She loved our walks. She wasn’t strictly an inside cat; she still liked to go outside. After all, she was an outside cat. She made friends with the other animals, opossums, skunks, foxes, and deer. Strangely, she was my cat outside, but she was John’s cat inside. She often slept with him. When he was sick, he called her his nurse.

It has been an absolute joy to have shared our lives with this cat family. Each and every one of them was special. We will never forget Timi, who really did give us the greatest gift. So, R.I.P. my little mama; you will always have a special place in our hearts.

Posted by Carol Henrichs at 7:21 PM