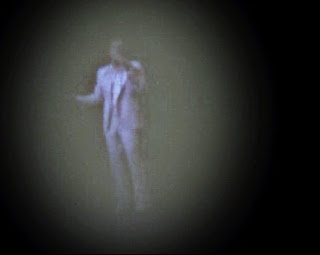 I can barely remember a time when I wasn't enamored with the late Andy Williams. His music has soothed my soul for almost 50 years.

I was recently reminded of just how long ago that was while cleaning out some cupboards in the garage. I found some old photo albums. I thumbed through them and was reminded about the time I saw Andy live in concert. Of course I had forgotten about these.

The pictures are poor, taken with a small film-fed camera from a seat fairly far from the stage. But even though details of his features are fuzzy, that stance is so familiar and recognizable. And, I will always believe that in this shot, he was singing just to me.

I still have the ticket stub from that concert. Andy performed with Michel Legrand on the piano. They were two superstars as far as I was concerned.

The concert was on a Friday night, Nov. 26, 1976 at Airie Crown Theater in Chicago's McCormick Place. It was a very cold, frigid night in the city with temperatures below zero with a cold, blustery wind whipping off the lake. It assaulted us as we crossed the parking lot to our car. Despite memories of the cold, that night burns in my memory.

This turned out to be a memorable night in my life. I was on a date with the man I would marry a few months later, the same man with whom I/ve shared my life ever since.

I always say I married John because he took me to see Andy--that's my story and I'm sticking to it. I was even able to convey that to Andy when I had the opportunity to meet him in person at his book signing of "Moon River and Me," a few years ago. Meeting Andy was to fulfill the dream of a lifetime.

I was so anxious to read his book, so I started it on the drive home. I wrote about that too as I savored the reading of Andy's memoir.

Though Andy has been gone for several years, I will never forget him and what he's meant to me. Despite the indelible mark he's made on me, I know the beautiful music he created will endure even longer.