Fulfilling the dream of a lifetime 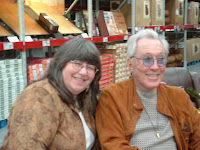 As a journalist, I could probably have acquired a free copy of the memoir, "Moon River and Me," written by famous crooner, Andy Williams, with the promise to write a book review. I didn't do that.

But this was no news story. This was intensely personal as I set out to meet the man I've admired for nearly a lifetime. This was to be the fulfillment of a dream.

Since Andy Williams built his own theater in Branson, MO, many people from all over the country have flocked there to hear that smooth, rich voice that caused President Ronald Reagan to call Andy Williams a national treasure. I didn't do that either.

What I did do though, was so much better, at least in my opinion. I got to meet Andy Williams at a scheduled book-signing when I bought a copy of his memoir at a Sam's Club in Springfield, MO. I got to meet him and tell him that I was probably his biggest fan. His response was predictable.

How many thousands of times has he heard that?

As my husband and I traveled nearly three hours to Springfield, I wondered just what I would say to this man whose face was as familiar to me as my own late father. Perhaps my almost lifelong attraction to Andy Williams had something to do with his resemblance to my dad. They had the same, smiling blue eyes, similar build, coloring, demeanor and sense of humor.

Sadly, I realized that there was nothing I could say to him that would convey the depth of affection I have felt for him or what his music has meant to me for more than forty years. How could I express that his music has brought me comfort or joy during sad or painful parts of my life? What words are there to explain that his music was always the exclamation point that sanctioned important events I've known?

I recall bringing my first child home from the hospital. No moment can be better than all the promise that comes with welcoming a new baby into the family. But as I rocked my new daughter to sleep thirty years ago, Andy and I sang her songs, like "Dear Heart," "Sweet Memories," and "Born Free." It sweetened an already beautiful moment.

If I was feeling sad, Andy's music comforted me.

He always sang to our family at Christmas.

I am grateful that at a young age I learned to appreciate good music, the kind he sang. I believe it is classic and timeless.

I'm often told I can't sing, but that has never stopped me. I always sing with Andy, whose music has always moved me to tears.

Whether just cleaning house, washing dishes, cooking, or any other activity, it all went better with Andy.

I admit—I have been enamored with Andy Williams since I was 14 years old. I treasured the albums I collected. My albums are not "collectibles," but they are certainly vintage. They have a kind of patina from being so well-worn. I have about a dozen of them. Their obsolescence never bothered me, for I also have Andy Williams' music on 8-tracks, cassettes, CD's and even a couple MP3's.

The first gift I ever received from a boy, way back during those innocent, puppy love days, was Andy Williams' Warm and Willing album. What a beautiful gift. This album was the first one I ever had in stereo. It was actually a duplicate, though mine was monaural—pre-stereo vinyl.

I've seen only four concerts in my life—two of them were Andy's concerts at Arie Crown Theater in Chicago. The first time I went with friends. It was spectacular as he sang with a full orchestra. The second time, my husband, John took me to see Andy. French pianist Michel Legrand shared the stage with him. Both were spectacular events.

I always said taking me to see Andy Williams was the reason I married my husband.

John and I now live in the Ozarks. So does Andy. There was a standing joke at our house when we still lived in Beecher. John told me that when we moved here we would be Andy's neighbors.

"We will probably run into him at the grocery store," he often quipped.

As we wheeled our grocery cart toward the fresh produce, I looked back to where Andy sat, signing autographs, a stack of books beside him and his Christmas CD playing in the background. He looked totally comfortable, but then, he too has made the Ozarks his home. He sat among people who really loved him—his neighbors. I couldn't help but smile, knowing that Andy Williams really was my neighbor and we met him in the grocery store.

Posted by Carol Henrichs at 8:44 AM