Merrily we quilt along

I can't believe this will be my first blog post of the new year. Heck, it doesn't even feel new anymore--it has been so long.

In fact, since I was here last, I celebrated my 62nd birthday, gotten through Christmas and New Year's, enjoyed a 37th wedding anniversary with my dear husband, marveled at the nine years we have now lived in Arkansas, solved the quilting dilemma that plagued me, as mentioned in my previous blog post, and started a new quilting project. Whew!

I digress. Going back to that last blog post, where I cried out for help in my quest to figure out how to finish all those quilt blocks of a yellow and aqua quilt, I must thank my friend Jane, a master quilter that I knew from high school. She steered me to the final decisions I've ultimately made on just how to finish this project.

It was not without a little pain getting there, however.

This project was a block of the month (BOM) project from quiltingboard.com, a gathering of talented folks who have bonded over their love of quilting. I started making blocks in January 2013 and completed the last one in December. I wasn't so sure what I wanted to do with these 12 12-inch square blocks. 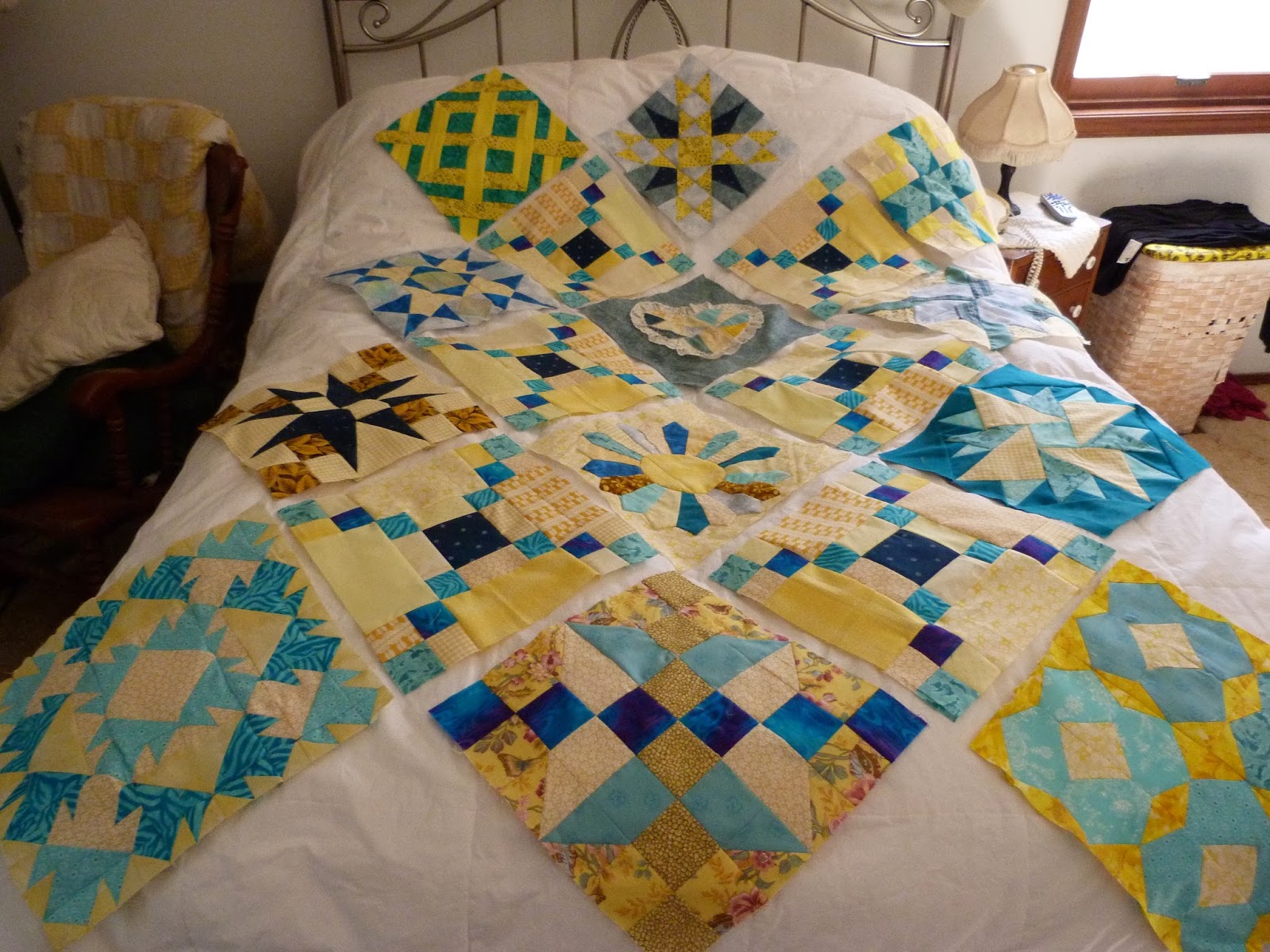 She offered a suggestion of setting the blocks on point, that is as diamonds, rather than squares. Twelve blocks does not translate into a bed-sized quilt, no matter how you look at it, but this was an interesting option. She actually emailed me a picture of what it might look like, with the addition of a few more blocks. I fell in love with the picture she created. So, I decided to do another six blocks to fit between these in the on-point design.

Once completed, I laid the design onto my bed just to get a look at how it might go together. I liked what I saw.

The only thing I need to do now is make the triangular-shaped blocks for the edges, the corner triangles that will complete the rectangle. More on that later.

I also needed to decide if I want to hand quilt it or machine quilt it. The difference would mean sewing the blocks together first, if it was to be hand-quilted or sewing them after they are quilted if I planned to free-motion quilt them first.

I decided to machine quilt this, since many of the blocks have lots of points. That means lots of seams. Seams are difficult to hand quilt through. Plus, I really wanted to work on my free-motion quilting skills. I like the idea of finishing a block with the top, back, and batting first and then putting them together. That alleviates trying to manipulate three layers--the quilt top, batting and backing fabric without wrinkles--something that is very taxing in the small space I have to work in. It also alleviates all that pinning/basting. I am so much better with small, manageable, detailed work anyway. Plus, I like how my last 'quilt-as-you-go' project turned out--periwinkle blue quilt.

Since I decided I wanted to machine quilt this, the first thing I did was add strips of fabric around each block. Fortunately, I had just barely enough of the fabric I wanted to use for this. Whew, it was close. I even had to sew a few scraps together to make the final pieces, but it worked. 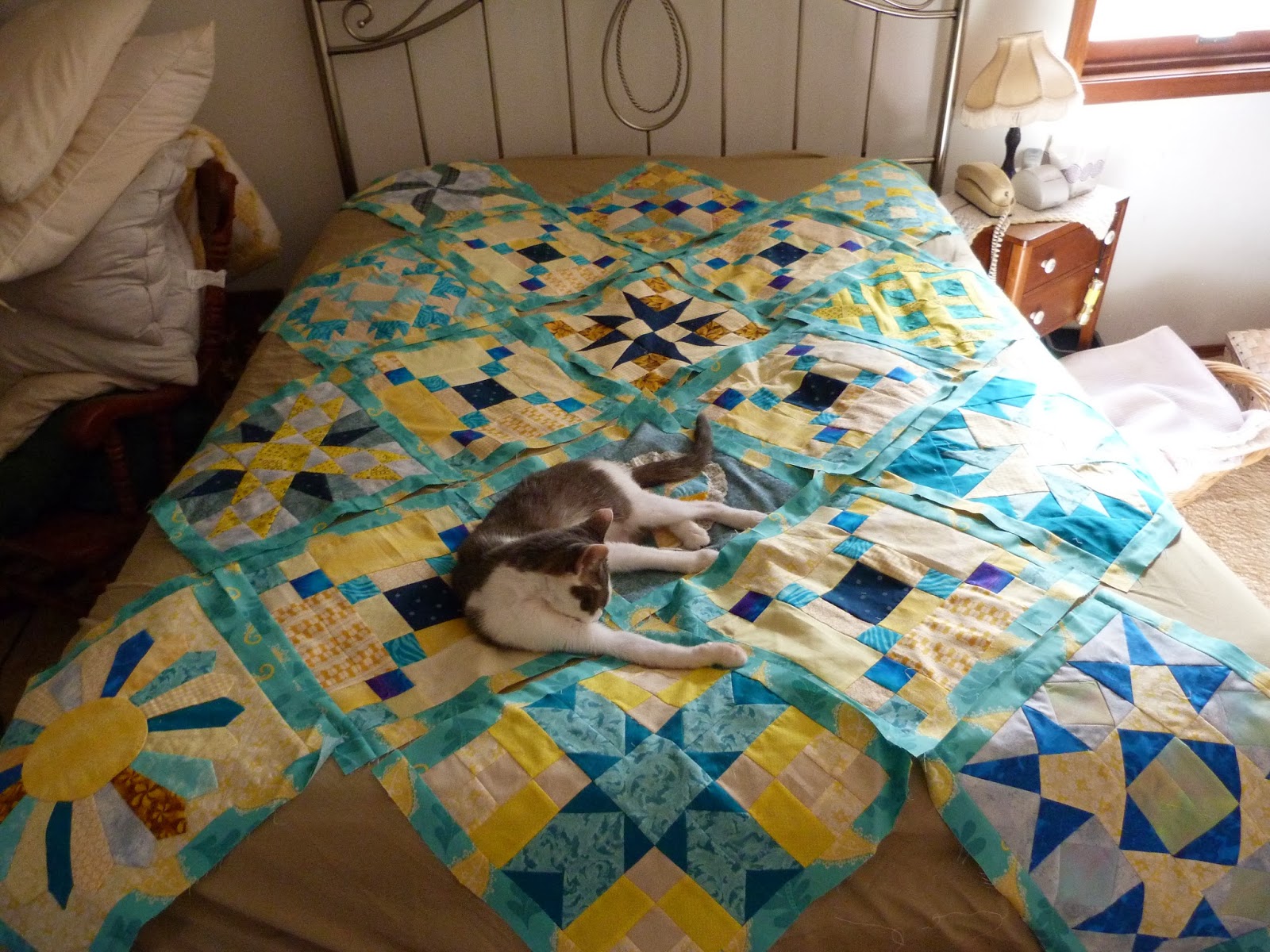 I liked how the secondary pattern showed up, the diagonal lines in the new chain blocks I had made to add to those already done. The 1 1/2" strips added to the overall size of the quilt too. I liked that. Now, to figure out how to do those triangles.

Oh boy! That was a problem that plagued me for days and days. I laid out a design, where the chain pattern in the mostly yellow blocks (the alternating blocks that I added) would continue. I wanted an aqua color to set off those setting triangles, but with the pattern to continue. I tried and tried to figure out how to do it, but just couldn't.

There is a formula, that calculates the size of the triangle, which is easy enough to figure out, but to use that size and get the pattern to continue--well I must have a mental block because I could not get it right. It would seem that making a square and lopping it in half along the diagonal would work, but that doesn't take seam allowance into consideration.

I couldn't let my EQ program tell me how to do it because I drew the initial pattern in for show, without accurate measurements. I'd have to design it all over again to do it right. Every step I tried to take met with a new problem.

Finally, I decided I am going to make plain yellow triangles in varied fabrics and be done with it. The pattern will not continue, but I've decided that it just isn't worth losing my mind over this. Quilting is supposed to be fun, and it is. I refuse to let geometry stand in the way of my enjoyment of the quilting process. So, even if the chain pattern doesn't continue, I'm OK with that. I think it will still be a beautiful quilt when it is done. 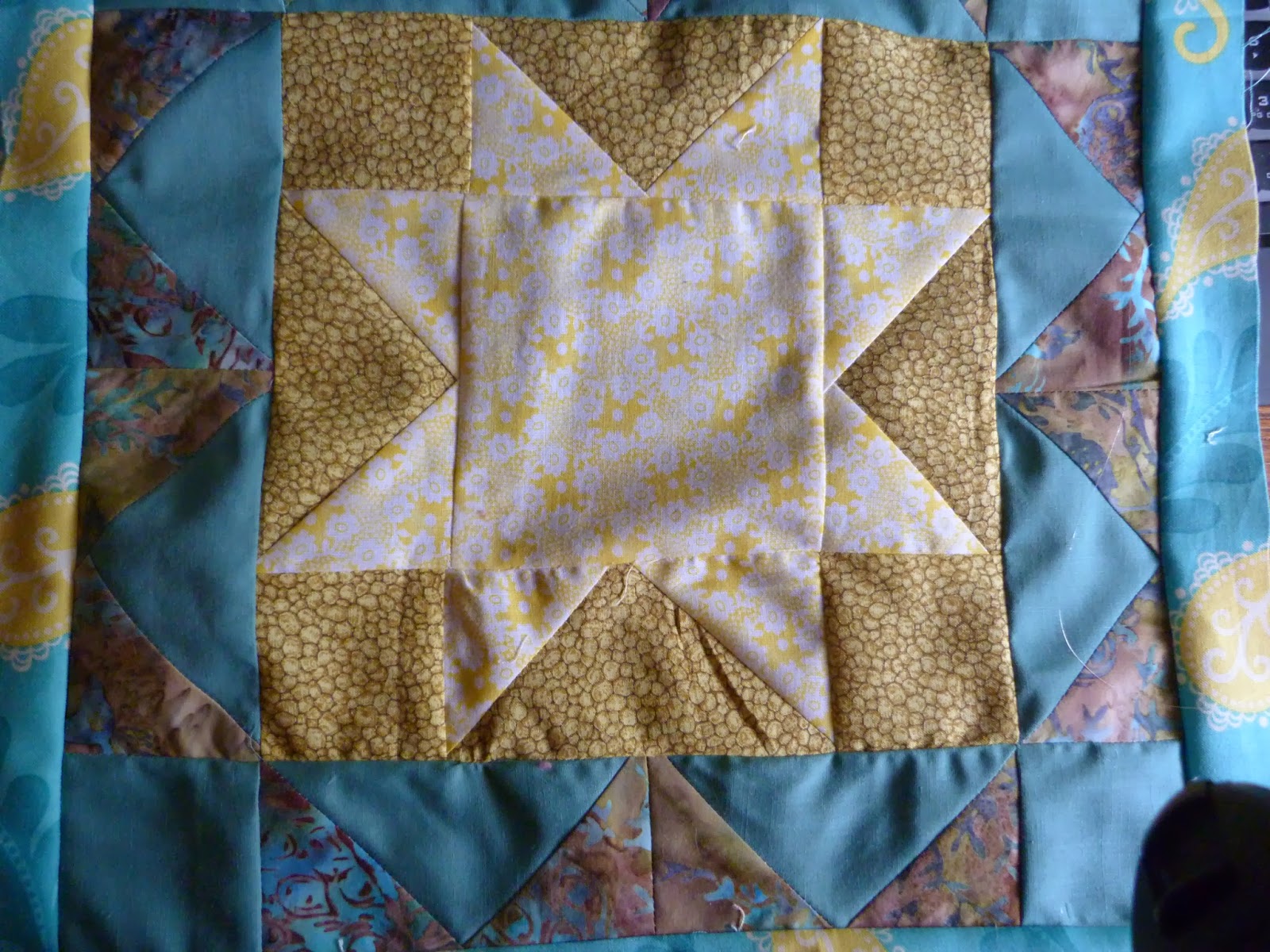 Making this simple decision was very freeing. Perhaps another day I can take up the geometric challenges of triangles.

I've also decided to replace that heart block, the one my cat, Ryan, is resting on. It doesn't seem to fit. Honestly, Ryan thinks I quilt just for her. She is the world's greatest critic, always enthusiastic about my work.

I decided to replace that heart block with a double star. This is my favorite block, one that I've put into so many projects already. I've decided this will be my signature block from now on.

So onward and upward in my merrily-we-quilt-along life.
Posted by Carol Henrichs at 2:19 PM