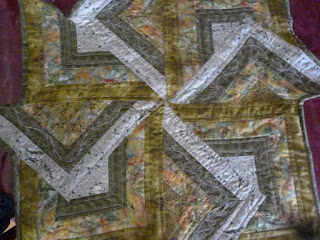 This week I forged on--past anywhere I had gone before--way out of the comfort zone of my quilting life thus far. Up until now, I had taken baby steps forward, slowly, a little at a time, trying new things.

I was smitten by a pattern for a table topper--the Swirling Stars-Card Trick Table Topper by Vicki Purnell at the following:

Her design just called to me, so I decided I had to give it a try. I first saw this pattern on the Quilting Board, a lovely on-line community that provides a wealth of information for all things quilting. The pattern was really different and I was totally intrigued by it. I'm not sure what made me think I had the skill level to try such a thing, but I wanted to give it a whirl...or should I say a swirl.

This project is made of triangles. Every quilting experience I've ever had with triangles has been near disastrous, but I decided to wade into it anyway.

Since I was going all out, I decided I would walk further down the gang plank by making the decision to machine quilt it when it was done.

First I cut out all the pieces. I've made six quilts and several other projects, but this is the first project that I've been able to use my newly-purchased 1/4" quilting foot. I'm not sure this made a marked difference, because I think my 1/4" seams were pretty close anyway, but the little guide on the foot was somewhat helpful. So once the cutting and sewing were done, it was surprisingly difficult to figure out how to arrange the pieces. I mean it wasn't obvious just by looking at them, like a simple block would be. Since I had the pattern in front of me, I referred to it often.

Then it was time to quilt. I did some stitch-in-the-ditch quilting in the seam areas. That turned out pretty well. Then I decided to sew straight lines along the edges of every other strip. That went well too. I was on a roll, so I decided to do stippling in the centers. I like stippling. I fell in love with this technique years ago when I first saw it at a quilt show. I never dreamed I would ever do it myself, since I wasn't even a quilter then. 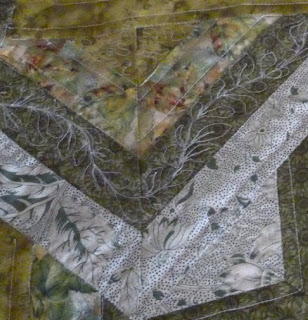 I liked the stippling, so I decided to make a curved line in the middle strips, just to offset all those angular lines. Easy, I thought. I practiced doing some gentle curves on a throw-away quilt sandwich. When I thought it looked good enough, I drew it on this piece and stitched away. I was having great fun, thinking that I had finally bitten the free-motion-quilting bullet.

Trouble is, I didn't like how it looked It resembled a snake crawling along the strips. Rather than take out all those too-tiny stitches, which I know would have ended in disaster, I decided to embellish the line. So, I took a deep breath and began drawing leaves along the snake--er--vine. I liked it. It looks rather 'artsy.'

The final challenge was the binding. I never even gave this a thought until I noticed the You-Tube tutorials on the instructions for binding mitered corners, inside angles and joining binding.

This was far from a rectangle, which I was used to. So as I cut and joined my strips for the binding, I closed my eyes, gave myself a quick pep talk, and jumped in with both feet. I watched the videos, took it all in, and followed step-by-step. It was actually easier than I thought it would be.

Posted by Carol Henrichs at 6:15 PM