I love watching the deer in my own backyard 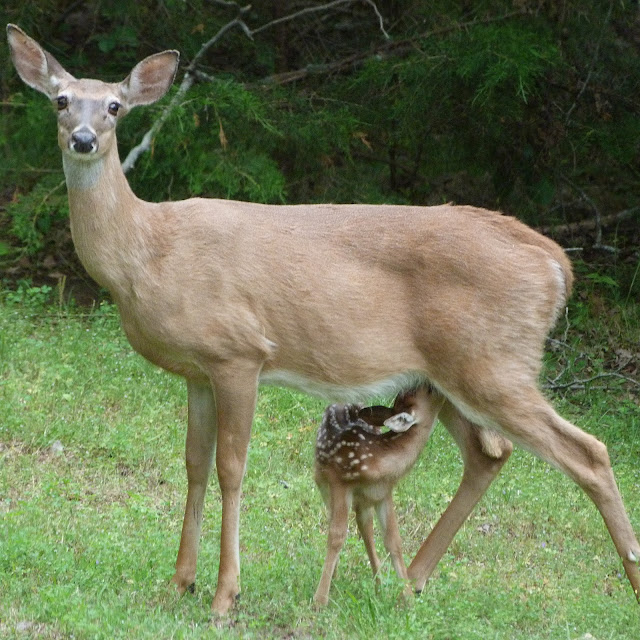 Watching the resident deer population has been a joy for me since the first moment my husband John and I visited Arkansas back in 1997 while on vacation.

I remember our first encounters with these beautiful animals.

We were staying at a resort on Bull Shoals’ Lake. We had just finished our dinner and were sitting on the patio adjacent to our cabin enjoying the solitude.

It was dusk. Sounds in the woods behind the cabin caught our attention as it displaced the sound of quiet we had been enjoying. I admit we were a little startled since we couldn’t see anything. But we knew something was out there. We focused on where the sounds came from and glimpsed what looked like a parade of deer moving slowly from left to right amid the dense foliage. We could see a dozen or more as they stopped to graze now and then.

We lived in a small farming town and had often times seen a deer run through the fields, but nothing like this.

It turns out that trip was live-changing. When we came here for the first time, John took one look at the lakes, the rivers, the wildflowers that lined the roadways, and incredible tree-lined hills, he declared that he wanted to move here when he retired.

We had come back several times before finally moving here eight years later just as we had planned.

I remember that on one of those early trips, we were just driving aimlessly down a country road when we saw a small herd of deer. They were in somebody’s front yard, just grazing on the grass. The view was the most natural thing in the world, yet we had never seen anything like it. We stopped to watch. It was mesmerizing. We couldn’t imagine how wonderful it would be to have such visitors at your own house.

Now that we live here, we see deer all the time and it is wonderful, most of the time. In fact, sometimes I see too many of them eating my flowers or bushes. That is not so wonderful. But, I still love watching them.

One day last year, I saw a doe out of my office window. She was walking on three legs. As I looked closer, I could see that her left rear leg was injured badly. She held it up as she walked, unable to put any weight on it. I looked closer to see that it was nearly severed. I had no idea what could have happened to her. Was it an animal that bit her or did she injure herself while leaping over a fence, or was she shot?

I immediately looked on the Internet to see if there was anything I could do for her. I read that generally, deer will take care of themselves; that trying to corral an injured deer could cause them to be spooked and they could injure themselves further. It broke my heart, but I let her be. 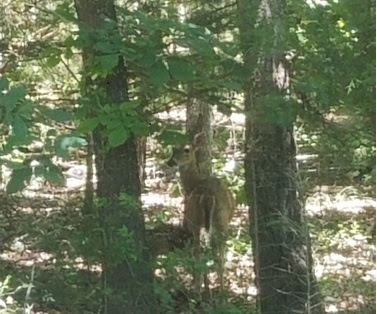 Throughout the rest of last winter and early in the Spring I caught a glimpse of Boo. Her gait was unmistakable. She was almost always alone, just grazing in the backyard all by herself.

I named her Boo Doe, after Boo, my deer 3-legged cat that had died the year before.

Yesterday, I saw Boo again. I was so glad to know that she was OK. As she passed by my window I could see that she was limping, but was able to put some of her weight on her leg. I watched her go into the woods. When she got to just beyond the trees, I could see her meet up with a tiny fawn that began trying to nurse. The fawn was obviously a newborn and wasn’t very steady on its feet. So Boo is a Mom.

This just made my day!

I’ve had many encounters deer and in fact with lots of wildlife, since that first day on vacation many years ago. I remain as much in awe of these beautiful animals now as I did then. It is one of the reasons I love living in Arkansas. I so enjoy the peace and quiet of natural surroundings. Every encounter with every animal, even if it is just observing them through a window, is wondrous to me.

I’m sad to say I didn’t get a good picture of Boo and her fawn; I shot through the window and screen with my camera phone, but I am sure I will do better in the near future. I’m sure they will be back soon and will pose for me like so many other generations of deer I’ve enjoyed over the years.

Ever since those first encounters many years ago, I’ve enjoyed watching these magnificent animals. I never tire of gazing out into the woods. You just never know what you might see there. And every now and then, something in nature will just make your day.

Posted by Carol Henrichs at 11:30 AM No comments:

Email ThisBlogThis!Share to TwitterShare to FacebookShare to Pinterest
Labels: Boo Doe and her fawn, deer, doe

I'm a little bit country, and more so every day

I admit, it isn't always easy to adapt to being a country girl, but it is so worth it.

Yesterday, I was thrilled to watch a doe with her newborn fawn scampering around in the backyard. In fact, I shot a video to mark the momentous event.


I watched until the fawn lay down at the base of an old cedar tree, right in the backyard. I could see it from most of the windows of the house, and certainly from the deck.

She looked to be sleeping quietly as her mother went off into the woods. I named her Hannah.

This morning, I went to check to see if Hannah was still there. She was. I knew how young she was, so I was worried that she was no longer alive. Upon closer inspection, I realized that she was breathing.

Since I know nothing about newborn fawns whose mother is nowhere to be seen. I watched her mother give a glance over her shoulder as she bounded into the brush. That was the last I saw of her.

Not knowing what to do, I sought out advice from the Internet. I learned that what I was seeing was not uncommon. Often times mothers will leave their fawns for as many as 12 hours while they eat and sleep. I feel good knowing the doe entrusted her baby to the crazy lady on the deck with a camera. If she is the doe I suspect she is, she knows I am harmless. She has seen me aim my viewfinder her way many times.

As noted, I checked to see if Hannah had a scab over her umbilical cord. She did. I didn't need that to tell me she was a newborn however. It was pretty obvious that she was brand new to this beautiful world in which we live. I lifted her tail--no problem there. She had no puncture wounds and nothing seemed out of the ordinary. 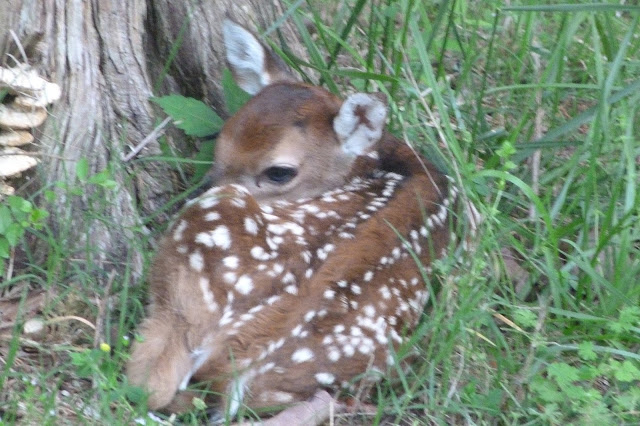 As I was performing my cursory examination, I took the opportunity to faun a little over this adorable fawn, petting her soft coat and touching the many spots on this beautiful, perfect, little creature. I didn't think once about how annoyed I get when the deer in the neighborhood decimate my vegetable garden and eat all my flowers. Instead I was mesmerized by the sheer wonder of this tiny critter.

Just as we were starting to bond, our resident mama cat, Timi happened by. Hannah must have been startled because she got up on those long, skinny, and unsteady legs In a blink of an eye, they not only held her upright, but she almost gracefully leaped away. She entered the woods at about the last place I saw her mother. Perhaps she is going back to her birth location. I hope so. I just hope her mother finds her and nurtures her. She deserves no less.

I hate not knowing what will become of her. No doubt I will be a nervous wreck until I see her romping around with her mother once more, as it should be.
Posted by Carol Henrichs at 10:01 AM No comments:

Who could be mad at a face like this?