How I lived through a computer nightmare 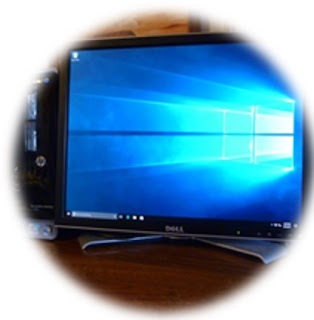 I remember when computers were billed as time savers, a way to create a paperless office, and basically the end all, be all for everyone. What a con!

We all fell for it though as we embraced technology for all it was worth. That was a long time ago. There are now generations of dependent computer users, many of whom cannot even imagine being without one, whether they are in the form of a desktop, laptop, tablet, or phone. The internet is as vital to daily life as the electric grid. Facebook, Twitter, and Instagram, for example, are the next best thing to chatting with neighbors over a fence or sipping tea on the front porch.

But when it doesn’t work, it can invoke panic and pain as surely as a bad case of the flu. When the computer is down and we lose data, it can have the same effect as a house fire where we lose all our possessions. We rely so much on our computers for business and personal use that we may not even realize how much of our lives revolve around it.

I’ve experienced such a loss, but I was really lucky.

It occurred following a Windows 10 update, a fate for which I have been victimized before. On the morning after, I turned on my computer as I always do. I got my morning coffee, came back and found what is commonly known as the blue screen of death.

The screen said I could restart or click on ‘advanced,’ with the former highlighted. Neither the keyboard nor mouse worked, so I was stuck. Prior versions of Windows had ways of solving this problem, but I knew of no way to resolve this. As instructed, I hit enter. I got a new screen that said Windows would perform a diagnostic process. It told me the process failed, citing, “critical process died.” It said it would restart my computer. I held my breath, almost sure this was just a glitch and I would see my familiar photo on the lock screen as Windows loaded and all was well. But that didn’t happen. I saw only the same blue screen that told me to restart or go to the advanced setting, which I could not. I turned it off, unplugged the system, hoping that would do the trick. It did not.

I got my laptop and searched google for “critical process died.” Ouch! Most of the entries told me to try the advanced settings, WHICH I COULD NOT DO BECAUSE I HAD NO MOUSE OR KEYBOARD. I tried all kinds of things, but nothing worked. I tore the house apart looking for a thumb drive that had a Windows 10 recovery on it. Finally, I found it. I inserted it—still nothing.

My laptop had a few programs on it, but nothing like what I feared I had lost. I started to think about all that I had done on my computer when the panic set in. I called Microsoft. After waiting a prolonged period of time, I was told that someone would call me “in two days.” I felt completely helpless. Thank goodness I still had my laptop, a tablet, and phone. I was not off the internet grid.

I pay bills online and take care of all the family finances and manage health information. I’ve taken pictures, including those precious family photos, as well as those of my beloved cats who are no longer living. I had quilt patterns and favorite quotes, recipes, and so much more I would really miss having access to, not to mention the computer games I play to keep me sane. There was just so much. The more I thought about it, the more I realized what was gone.

But I am fortunate. I have friends who are young, smart and well-versed computer gurus who offered to help. They were able to restore my operating system and even back up my data. I have no idea what they did, but I am so grateful. They saved me from having to buy a new computer. They brought mine back to life, as if it is a new computer.

The bottom line is, and we have all heard it before, backup, backup, backup. I try to practice what I preach. In fact, just after I paid the bills this month, I backed up my data. I don’t always do that, but I did this time. I will now make it a habit every month.

I had also backed up my documents and pictures on a thumb drive, though not for the past two years. I figured I lost everything that I had done since then. I was resigned that this stuff was just lost. But I learned that when my friends were able to retrieve the current data as well. Basically, that means I have lost nothing. It is all there.

I had been through this computer nightmare before. The reason I backed up my information two years ago, was because that was the last time a Microsoft update killed my computer, a new one I had just purchased.

At that time, I called Microsoft. Over several different sessions, various technicians walked me through restoration, I remember sometimes, late into the night. I talked to several people at that time, some who knew more than others. Though they all tried to be helpful, some of the information they provided contradicted what others had said. The result was that my system ran, but was never really flawless, as expected. The ultimate answer once things were working was to simply start another user account and copy files from one account to another. We did this several times. It wasn’t a perfect solution because it didn’t fix the problem. It only masked it. As a result, I often times, looked for a file, knowing its location only to find a blank folder. It took a while for me to figure out that if I went to the previous user account, and looked in the same folder, I could find what I was looking for. It was rather nightmarish trying to find things. This problem also gave me multiple copies of picture files which I have been trying to delete, rename, and organize.

So now, my computer is really like a brand new system. It is actually running better now than it was before the crash, either crash.

Even with everything working, things are not quite what they were, so I’ve spent days at the keyboard trying to retrieve organization out of chaos. I have the data, but not the programs to access it. So, the first thing I did was to re-install programs I find necessary—programs that handle finances, word processing, email, picture management, and virus protection, etc. The more I put back into my system, the more I realized the obscure programs I have come to rely upon, that no longer existed. Reinstalling downloaded programs is difficult without serial numbers, keys, or registration numbers. Those should definitely be backed up along with the downloaded programs and internet locations.

It has taken me hours and days, but I have been able to restore all of the necessary programs I use regularly. My files are all in one user account. There are no longer redundancies. In many cases, I’ve been able to restore databases that go back to where I left off. I am even back to having all my photos in a jumbled mess, just like before. I thought I had lost all the work I put into them the last couple years, as I’d begun to organize them. I now have those files so I can continue trying to tame my thousands of photos.

The bottom line is that my next purchase will be an external hard drive. And, I like the idea of also backing up files onto a cloud. Not only is my computer restored, but my computer life is restored as well.
Posted by Carol Henrichs at 12:35 PM No comments: Links to this post