Shingles -- Yuck! What is going on with that? 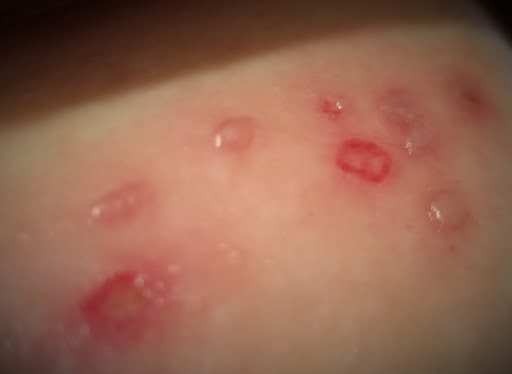 I have heard of shingles, but I never knew much about it. That all changed a few weeks ago, as an outbreak totally took me by surprise.

Around the first of the month, I had been sitting at my sewing machine more than usual, trying to finish a quilt I had in progress for years. My back was sore, but I just attributed it to activity I wasn’t used to.

A few days later, I was sitting on my couch, cooing at and playing with my cat. I craned my neck, just a little too far. I heard a sound and then an instant stiffness. So, now I was pretty much in pain from neck to back, coincidentally, along my left side. The pain migrated to my abdomen. I was pretty miserable. One more thing was bugging me. I had been outside recently and had a few chigger bites that were, oh, so itchy. Could it be any worse?

Oh yeah! The pain in my stomach was intense, so I thought I’d go to the doctor. I actually saw a nurse practitioner. I told her about the pain I was having. Then I showed her my chigger bites.

“Those don’t look like chigger bites. You have shingles,” she told me.

I had no idea what that meant. Shingles was not even on my radar screen. I knew nothing about it, except it included an ugly rash and lots of people complained about it. I was given an anti-viral to take and sent home.

I filled my prescription and took my first pill. I figured I had a mild case of this, since I just had 9 spots on my left hip. I had no idea this would be a big deal. Boy was I wrong!

I posted something about having shingles on Facebook. All my friends said they were very sorry I had this. It still didn’t register, until that night.

I went to bed like always, propping the pillows just so, finding that perfect place between any wrinkles in the soft sheets. My skin was such that a tiny wrinkle felt like lying across the Rock of Gibraltar. I expected to curl up into a comfy nest, but the minute I got comfortable, pain shot through my back and around to my abdomen. I still had a stiff neck. I couldn’t find comfort. Then I started feeling feverish. I was a little nauseated, and had a bad headache. I tossed and turned unable to find relief. With that and many bathroom trips, the night was long and awful. I got up to sit in my recliner where I finally fell asleep for an hour or so. I felt anxiety, panicky and when I did sleep, I had nightmares. This was the worst night of my life. I couldn’t escape the pain. I tried Tylenol and Advil, but nothing helped.

I attributed all this to the anti-viral drug I was taking. I told the doctor the next day I just couldn’t take it. She suggested I take a half. I said I couldn’t handle even half of what I felt the night before, so I wasn’t going to take it again. She gave me a prescription for a pill for nerve pain.

I found that the next night was the same. The pain meds helped, but it was obvious when they wore off. This misery might not have been the anti-viral pill; it might have been the illness that had suddenly awakened. I realized this was not a mild case. The intensity reminded me of being in labor but with no new baby to look forward to.

The next night I decided to try taking ½ pill. I did. It wasn’t bad. So I went to the suggested three per day. That night was as bad as the first night. No more pills for me.

I have a problem with medications. I sometimes have a bad reaction to them, so I just don’t take them. I used to take blood pressure pills, but by changing my diet, and perhaps boosting the activities my lifestyle, I normalized my blood pressure. I no longer need to take them.

For the last two weeks, I didn’t eat, didn’t sleep, had no energy, and actually lost thirteen pounds. Though quite effective, I don’t recommend this diet to anyone.

This went on for more than two weeks.

I may have turned a corner. Last night, three weeks after the first pain, I was able to sleep in my bed the whole night for the first time. I even made myself some coffee. I hadn’t had that since this started either.

I’ve started to want to do things around the house too. Last night I did some laundry, even cleaning the kitchen rugs. I may even vacuum one of these days. All my chores have so kindly waited for me. I’m not sure I have the energy yet to jump right into it, but I do feel hopeful. At least the nerve pill and Tylenol take the pain away. Pain is just so exhausting. But, I may live!