Sometimes a movie really moves me 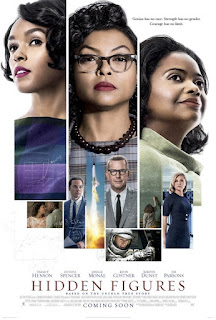 Little did I know when I read the description of a movie about three women working for NASA in the 1960’s that I was about to experience a host of emotions, from inspiration, nostalgia, and a personal recollection of national pride.

The story itself was excellent and was based on real events—events that I remember when I was 11 years old.

The movie was “Hidden Figures,” released by Twentieth Century Fox in 2017. It was one of the best movies I’ve seen in a very long time.

I’m not sure how I missed this movie, which has won several awards, including a Screen Actors Guild Award for Best Performance by a Cast in a Motion Picture and a BET for Best Movie. It received three nominations for an Oscar, including that of Best Picture.

The story, detailed the career and struggles of three brilliant African-American women, but highlighted the mathematical genius of Katherine Johnson, who was largely responsible for the mathematical calculations that made possible the launch of Friendship 7, the space capsule piloted by John Glenn, the first man to orbit the earth in 1962.

Johnson as well as Dorothy Vaughan, computer programmer and Mary Jackson, an aeronautical engineer as well as Christine Darden who later joined NASA and was not noted in the movie but was in the book of the same name, helped to shape the space race between the United States and the Soviet Union, which was the first to send a man into space.

I recall those times. The charismatic President John F. Kennedy inspired our national interest in the exploration of outer space. Even as a child I remember the intensity of concern during Glenn’s four hour flight.

Television sets across the country were tuned in to watch the launch of the Mercury rocket. The nation held its collective breath as Glenn’s space capsule re-entered the earth’s atmosphere and subsequent communication silence. There were problems with the heat shield and it was unknown if the craft would make it back. But then he remarked that the parachute had deployed and the capsule splashed down into the waters of the Atlantic Ocean.

Interestingly, this flight took place during the cold war with the Soviet Union, which is not unlike the adversarial mood today with Russia. The difference between then and now is that back then the country was completely united. Today it is completely divided.

The movie depicted the struggles of these women, African-American women in a white male-dominated workforce. Despite the amazing work they performed, they were still forced to sit in the back of the bus, unable to attend necessary classes in all-white schools, and to use an inconvenient “colored rest room,” at their workplace.

It was exhilarating to watch as the barriers came down. These strong women nudged their way to equality and justice, not through raucous demonstration as exemplified by the times, but through quiet, deliberate achievement. They were certainly not the “squeaky wheels,” which may be the reason they remained hidden figures for so long. Yet the results of their actions were epic.

A good movie is so much more than mere entertainment. I love a movie that inspires, teaches and evokes real emotion. This was such a movie. I was more than a spectator. I felt the struggles. I relived the moments. I remember some of the scenes of actual footage. I relived the feelings of jubilation and pride of a unified nation, if only for a little while.

Posted by Carol Henrichs at 10:05 AM No comments: Links to this post