My family had just moved into our new house in Chicago’s western suburbs a year earlier. I had a birthday just three days before. I turned 9. I was making new friends. I was a happy kid. Life was great, until this day 59 years ago. In some ways, that event far away changed my life.

On Dec. 16, 1960 two airplanes collided in a horrific mid-air collision over Brooklyn, New York. At that time it was the worst air traffic disaster ever experienced. 134 people died. 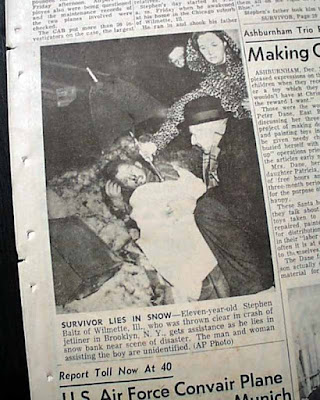 But the one thing that brought this incident close to home for me was that a lone survivor was a young boy, just two years older than me, who lived for a few hours before succumbing to his injuries the following day. His name was Stephen Balz. He was flying alone that day, enroute to Grandma’s house for Christmas. His mother was waiting for him at the airport.

His family lived in Wilmette, also a suburb of Chicago, but on the north side of the city. Our new house was just a few miles south of O’Hare Airport, where Stephen’s plane took off from.

Our old house was next to a set of railroad tracks. I was accustomed to the sounds, having lived my whole life there. The trains never bothered me as they rumbled down the tracks with their syncopated clickety-clack sound. But airplane noise was new to me. The engines roared and screamed. In those days, airplane noise was deafening.

After that day, I was afraid of the planes flying over the bed where I slept. I remember sleepless nights as I stood on my bed looking out my windows and watching the planes roar past our house at just above treetop heights.

Years earlier, I used to enjoy watching them. In fact, my family used to spend hours at Midway and later at O’Hare Airport watching planes take-offs and landings. It was a source of entertainment just as the jet age was beginning.

But hearing about this accident had me on edge. It so disturbed me, that I couldn’t get the image of that young boy out of my head. Accounts at the time related that as he lay in the snow he told his rescuers that when he looked out the window of the plane, he recalled that New York looked beautiful in the snow, like a fairy land.

For years, I had remembered his name. I remembered the photo of that brave, little boy just two years older than me.
Then along came the Internet

For some reason I googled the name I remembered for a lifetime.

I was completely shocked to come face-to-face with the photograph I had carried inside my head since I was just 9 years old, the picture that haunted my memory.

I am grateful to the technology that allows us such a view into our own past, our own subconscious mind, even if it is painful.

I began to read everything I could about Stephen and about the crash itself. 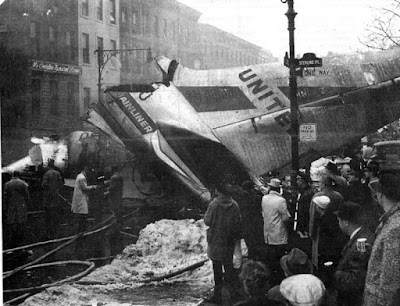 I’ve seen thousands of airplanes over the years. Airplanes and airports have seemingly always been a part of my life. But to be confronted with the images of a broken airliner with parts and pieces scattered among normal looking neighborhoods remains a frightening and terrifying spectacle.

The Park Slope neighborhood of Brooklyn was just one of two locations marking this tragedy. Another site, one on Staten Island where the other plane fell from the sky turned a field into a graveyard with parts of bodies strewn among carefully wrapped Christmas packages.

I can barely imagine the devastation this caused to so many people who just wanted to celebrate Christmas with their loved ones. The story itself breaks my heart.

Yet, some good has come out of this horrific tragedy, as it always does. It provided lessons about air traffic safety, contributing to what makes aviation one of the safest modes of transportation available.

I will always remember Stephen and the good, caring people who came to his aid. I continue to read about this tragedy and the human toll it took. Somehow I feel I owe it to Stephen to remember. I’ve carried his memory with me for 60 years. I suppose I will take it to my grave.

So on this day of remembrance, continue to rest in peace Stephen.
Posted by Carol Henrichs at 8:37 AM 2 comments:

Retail stores are said to rush the season 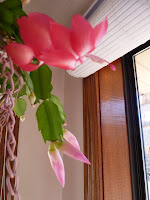 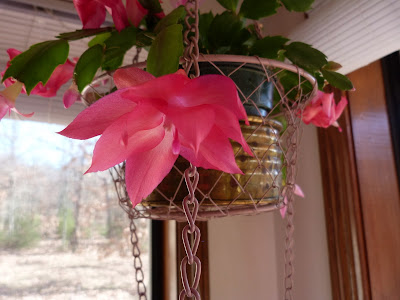 They have nothing on my Christmas Cactus.


I suppose rushing the season is just how it is these days. At least that is the message I'm getting from one of my Christmas Cacti.

I have several of them actually, but this plant has been blooming for more than a week already. Even if it is a Thanksgiving Cactus, it is still early.

No matter. I love their delicate pink flowers whenever they open.

I bought this plant after Christmas two years ago at Home Depot because it had a pretty pale pink flower. Note the buds in the photo above. Last year I was surprised to learn the pot I bought really contained two different plants, as evidenced by the flowers that have already opened. They are a much deeper color. It was such a pleasant surprise. 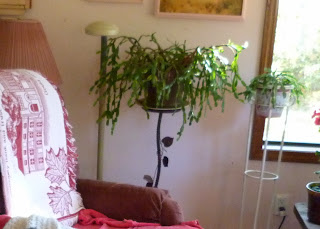 I actually have several Christmas Cactus plants that always bloom at Christmas. The large one, shown at right, is the mother plant. The one in the pot next to it was started from a cutting. This is just one of several that I've grown from cuttings.

I obtained this plant from a garage sale in Bull Shoals many years ago. She said it had been in her family for generations. This reminds me a Christmas Cactus my Aunt Hazel had for many years that had belonged to her mother.

Perhaps these should be renamed legacy plants.

These plants are so easy to grow. They don't require anything special. Because they are succulents, they will live with sparse watering. In fact, they like to be on the dry side. They like indirect light, but are not too fussy about it. They have even withstood little cat paws that bat and flick at them as though the fronds were a toy.

Getting the plants to bloom

I've often heard that to stimulate blooming, these plants must be placed in a closet from for six to eight weeks before Christmas. I have never done that and my plants bloom like clockwork. The natural shortening of days in the winter are enough to encourage blooming. No closets are necessary in my experience.

For anyone new to indoor gardening, I think a Christmas Cactus, or even several, is a must have.

Posted by Carol Henrichs at 9:49 AM No comments: