Got some ugly fabric--make a rag rug! 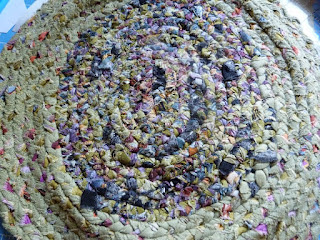 I was recently given a box of fabric from a dear friend. Some of the pieces were beautiful 100% cotton that would lend themselves well to any quilting project. There were some though, that I wasn't particularly fond of. And there was also some knit fabric that I wasn't quite sure what to do with.

I put my thinking cap on.

I decided to make a rag rug. I needed a rug in the laundry room. I refuse to pay the ridiculous prices for a little scatter rug, so I thought this really fit the bill.

I did a cursory Internet search, and learned all I could about rug making. I decided to make a braided rug.

I vaguely remember my grandmother crocheting rag rugs, but for some reason I settled on braiding instead of crocheting. I may do that next time.

I didn't have any expectations of a final product. This was more or less an experiment. If it worked, fine. If not, that was fine too. Mostly, I was just happy just to have the handwork while watching television. Nothing makes me happier than watching television while working on a project. I am still hand-quilting on my yellow quilt, but I thought a little diversity might be nice for a change.

I ripped 1" strips from the cotton fabric that I wasn't crazy about. I cut 1" strips from the green knit fabric. I started braiding, and braiding, and braiding. When the strips came to an end, I tied the two ends together and kept on braiding. Later, I decided to hand sew the two ends together, since the knots were quite obvious. I didn't care enough to take the thing apart though, since I really didn't care how this work turned out. I kept on going until all the strips I cut were gone.

Then I wound the braids around and whip stitched them into place to form a slightly elongated circle. What I ended up with when that was done was a roundish bowl-shaped thing. So much for my rug idea. Instead of a nice flat rug, I had a bowl. My husband suggested I wear it on my head and call it a hat. I didn't think that was funny. For two days I had been braiding and sewing, braiding and sewing.

I gave in and decided that a nice fabric bowl could be a useful item. I could keep fruit in it. I was content with that idea. 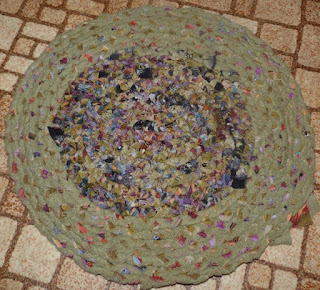 The next morning I woke up with an attitude about the thing. I figured I would try to flatten it out by ironing it. I had just had a similar experience with a Dresden plate quilt block I made for the Craftsy block of the month project. That block also refused to lie flat until I tamed it with the iron and lots of spray starch.

Had I not just had that experience, I might not have thought about ironing the dickens out of it. With a little patience and a lot of steam, I finally got the thing to lie flat. The fabric was pretty forgiving since it was stretchy anyway. Once it was flat, I pinned it to my ironing board pad to keep it flat as it dried.

I took out the pins and this is the result.

Because there is only a small amount of that green fabric, I'll have to use something else. I do have some knit fabric that is a different shade--a real ugly color, but this has lots of ugly colors in it too. That is why I didn't put it into a quilt. I think I will continue on with this and see how it goes.

I will take the small bit that is left of the green color and incorporate it (one old green strip with two new green strips) with the new green color. I may even increase the size of the strips to make it get bigger faster.

What a fun project this turned out to be!
Posted by Carol Henrichs at 10:19 AM