I'm not sure what has come over me, but I believe I'm trying to become a quilter.

On the recent quilting board I joined the other day, I decided to participate in a block of the month project. The finished quilt will be a sampler, with 12 blocks, one to signify each month. This month, the theme was a pre-chosen block had a chill about it. The one that was picked was called snowblossoms. It was to be done by paper-piecing.

I never did paper piecing before! If learning from mistakes is the best way to learn, I should be able to teach a class by now.

The first thing that happened was my sewing machine began sewing backwards. I have no idea what that was all about. I looked in the owner's manual and online, but the only advice I saw was to unplug it and plug it back in. Who would try a computer solution would work on a sewing machine? I did--it didn't work. Someone wrote that the problem could have something to do with the polarity in the plug, whatever that means. Someone else said it could be the foot pedal. I have no idea what it was, but I took out the bobbin, put it back in, lowered the feed dogs and raised them again, re-threaded the machine. Lo and behold it began to work properly again.

I should have known this was not going to be a good day for sewing. I spent the entire day trying to 'get' paper-piecing. The block was fairly simple, or so the board participants said, but you couldn't prove it by me. It seems that everything that could go wrong, did, from sewing the piece wrong side out, running out of bobbin thread, to cutting off an important corner, and who knows what else. I was so exhausted by time I got all of the pieces cut out that I decided to finish it in the morning. 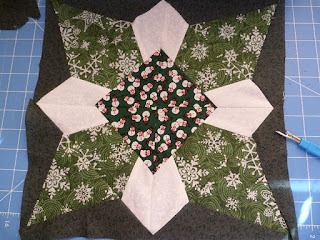 That was this morning and I did just that. I wasn't happy with the block however. So, I decided to try all over again. I just finished what I think is a pretty nice looking block. I'm fairly happy with how it turned out. By the way, I took this picture of the block with my favorite tool beside it--the seam ripper. That sucker got a real workout!

I'm not sure I like the paper-piecing technique, but then it may be too early to tell. I did learn a few tricks along the way, like cutting the pieces close to the size needed and making sure to press each addition to the piece with the paper still on so it doesn't shift. I'm sure there are plenty more tricks to learn. Only practice makes perfect.

I'm not sure paper piecing enhances accuracy. I still had a couple pieces that were less than perfect. It is also very messy with bits of paper, fabric pieces, and of course threads all over. I found that it also created lots of waste, yet I can see where cutting more precisely at the beginning would help with that.

It was a fun experience though and I look forward to trying it again. So here it is Jan. 4 and I already have my January block completed. This might just be good for me. So, on to February.
Posted by Carol Henrichs at 3:44 PM